Finished! "The Early Stage" My first abstract painting in this series. 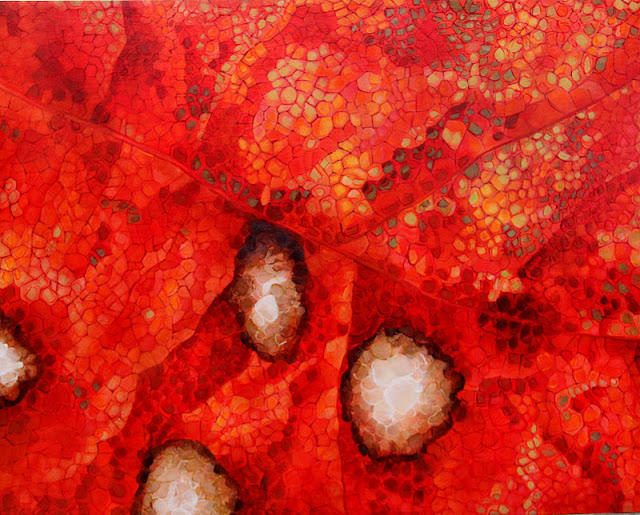 The following information below has been taken from the Alzheimer's Association's website http://www.alz.org.  I am referencing this information so you can better understand my first painting.  Please read this and if you have any questions or just want to comment please email me or comment below.
"Two abnormal structures called plaques and tangles are prime suspects in damaging and killing nerve cells.
Plaques are deposits of a protein fragment called beta-amyloid (BAY-tuh AM-uh-loyd) that build up in the spaces between nerve cells.
Tangles are twisted fibers of another protein called tau (rhymes with “wow”) that build up inside cells.
Though most people develop some plaques and tangles as they age, those with Alzheimer's tend to develop far more. They also tend to develop them in a predictable pattern, beginning in areas important for memory before spreading to other regions.
Scientists do not know exactly what role plaques and tangles play in Alzheimer's disease. Most experts believe they somehow play a critical role in blocking communication among nerve cells and disrupting processes that cells need to survive.
It's the destruction and death of nerve cells that causes memory failure, personality changes, problems carrying out daily activities and other symptoms of Alzheimer's disease."
I think it's so important to get this information out and to be able to talk openly about this disease.  This disease is so hard for the patient.  He or she knows this is happening to them for quite some time into the disease.  I can't imagine how difficult this is for them.  I remember my father-in-law telling me in tears when he was in the early stage that he knew he just couldn't figure how to do things anymore.  That frustration was so overwhelming for him.
Let's also not forget about the caregiver.  They have to not only accept the fact their spouse or loved one has been diagnosed, but in the later stages they have the difficulty of taking care of them as well as making that difficult decision as to when to admit in a care facility.
As I now begin my second abstract painting, "The Middle Stage",  I hope to help you understand what happens to the brain as the disease progresses.
﻿
Posted by Amy Greving at 7:02 AM